Started out thinking we would go to Bar Harbor for the weekend then realized, after finding very few rooms available unless we’re willing to shell out $800 for two nights, that this would be a good time to take the Martha’s Vineyard/Nantucket trip we’ve been pondering. We love Martha’s Vineyard and have taken several day trips there—and when I say day trips, I mean home to Martha’s Vineyard and back in one day. One long day…It’s so much harder for me to do that now.

Last Saturday we did Ogunquit/Rye and I was confined to the couch for a few days after that so we decided our next trip will include an overnight or two at a motel. Now we’ve decided that we’ve been to Martha’s Vineyard enough (that could never be true for me but for this excursion we’ll go with that). Nantucket would be awesome (as day trippers) since we’ve never been there and it is on my bucket list. The internet is great—I can book the ferry reservations within minutes but the room?? Too many choices on the Cape…and yet so few that are available for one night. And then I need to factor in the potential traffic nightmare. Maybe we’ll just stay home and chill….

Those two moles I had scraped from my back? Luckily they were just atypical and only one needs further “surgery.” The appointment with the surgeon did get cancelled…..so now I get to wait until the end of November for the removal of the mole. Must be a history of melanoma doesn’t create a sense of urgency. One more thing to be thankful for, I suppose. I just realized it is scheduled for one year and one day after my adrenal cancer surgery—at least Thanksgiving is the following week this year. And Steve, you are on notice that we are hosting it. Just in case next year we can’t….

Major accomplishment—it’s now two weeks in a row that I have submitted two chapters of Anne to my writing group. In order to do that, I feel as though I have spent every free minute at my laptop. Of course I haven’t. I did manage to squeeze in that trip to Maine and two days on the couch not feeling well—and two days on the couch not feeling not well! I’m aiming for another submission this coming week—at this rate I’ll have the second draft completed in 2013. That shouldn’t even be seen as an accomplishment considering I am “retired.” But what happens to my book when Steve retires and we head to Arizona—and I’m no longer (temporarily) an active participant in my writing group?? We really need to get Facetime or Skype working.

Just let the cat out and realized the sky is blue and the sun is shining. What shall I do?? Probably getting dressed would be a good start. The pressure…. 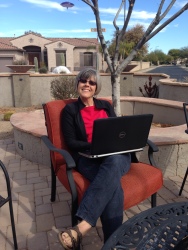